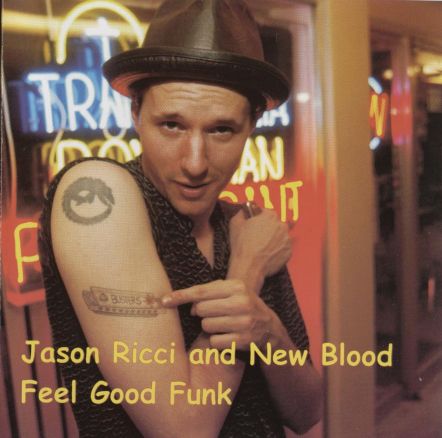 Jason Ricci has released an absolutely stunning solo CD, titled Feel Good Funk, which could end up being one of the best blues albums of the year. Ricci is not only an amazing harmonica player; he’s a very affecting singer as well, and doesn’t try for the histrionics like some younger artists might. The CD is a mix of well done covers (“Shake Your Hips,” done here as “Hip Shake,” “Driftin’ Blues,” “Everything I Do,” and “Scratch My Back”) and moody instrumentals which have elements of jazz, funk, and blues mixed in. My favorite tracks are the instrumental tribute to Junior Kimbrough (“Mississippi Mood”), Ricci’s take on Charles Brown’s “Driftin’,” and the romping, stomping “Hip Shake.” The title cut, in which Ricci raps and blows over a nasty bass line, is also a keeper. The band also provides outstanding support throughout the disc. For fans of harmonica blues, or just fans of great music, this CD is a ‘must own.”

The content provided on this site is for promotion purposes only. If you like the music, please support the artists and purchase the CDs of the music you like. Files should be deleted within 24 hours. GranaziBar is not responsible for anything you may download. If you find any content that is violating the copyright law, please send an email to xotikosamothrakis at hotmail dot com and the content will be removed. Please note that songs are available for VERY short amount of time.If you like the music BUY IT.
%d bloggers like this: