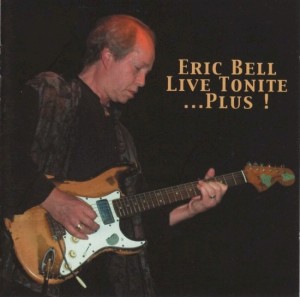 Thin Lizzy’s forgotten guitar hero returns in a bare-bones blues trio format, taped before an appreciative crowd. Curiously, the venue isn’t listed, although the album’s Swedish-only release in 1996 most likely points there. Angel Air’s reissue sweetens the pot with three tracks not on the original release. Straight-ahead blues is the game here. The gig opens with a rampage through “The Stumble,” whose 1966 recording featured Eric Clapton on guitar. Bell’s style is scrappier, but no less spirited, as he demonstrates on brisk strides through standards like “Baby Please Don’t Go,” “Oh Pretty Woman,” and “Things I Used to Do.” Being an Irishman also enables Bell to explore his own roots, as evidenced by a show-stopping slow burn through Van Morrison’s epic ballad, “Madame George.” Naturally, Bell revisits his Thin Lizzy days with a fiery demolition of the late Phil Lynott’s swaggering macho anthem “The Rocker.” Bell makes room for Lizzy’s rearrangement of the traditional “Whiskey in the Jar” — a song so radical it didn’t include a bass part, yet still graced the U.K. Top Ten in 1973, and soars just as highly here. The real surprise is why Bell includes just three originals, including the lovelorn lament of “Two Ships” and “Just to Get By,” a world-weary tally of life’s ups and downs. That neither track made the original cut is amazing. But that’s a minor point, especially since the music here is so crisp. Bell’s guitar is succinct and to the point, while bassist Tony Wooton and drummer Romek Parol lend appropriately unobtrusive support. (The Bell-written anecdotes, “Just a Belfast Boy,” are also delightful.) Pure blues fans and Lizzy devotees should find plenty to satisfy them here.

In The Mid-60’s a new generation like a musical storm , changed the values of rock music. Even if the badgets were low , the enthousiasm was so high that it would spread though every states in the country …
Especially New Mexico which produced its share of rebels!

Somewhere between “funky” era Grant Green and plain funky Melvin Sparks lyeth the great Boogaloo Joe Jones. Its the early 70’s… admittedly the organ thing is dying out, but labels are still desperate to capture the “young” generation… hence along come the Boogaloo… a funky Jazz guitarist who is the epitome of both “soul” and “Jazz” and a sound that has the crispness of the old funky Blue Note sound… with a bit of extra bite added in.

The content provided on this site is for promotion purposes only. If you like the music, please support the artists and purchase the CDs of the music you like. Files should be deleted within 24 hours. GranaziBar is not responsible for anything you may download. If you find any content that is violating the copyright law, please send an email to xotikosamothrakis at hotmail dot com and the content will be removed. Please note that songs are available for VERY short amount of time.If you like the music BUY IT.