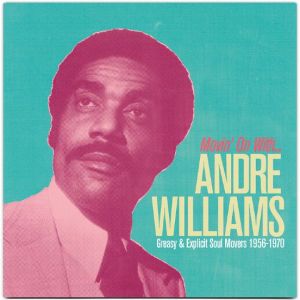 After spending the ’80s and much of the ’90s out of the public eye and in a drug-induced haze, Andre Williams made a striking comeback with 1998’s monumentally freaky Silky, and since then he’s firmly established himself as the dirtiest old man in R&B, cutting wild albums with musicians young enough to be his grandkids. However, while all this was going on, most of Williams’ classic sides from the ’50s and ’60s were dead out of print, and many new fans had to learn about the man’s musical history through hearsay. Movin On: Greasy and Explicit Soul Movers 1956-1970 is the first compilation that makes a reasonable attempt to document Williams’ estimable musical history (at least up until 1970), and it opens with six great sides he cut for Detroit’s Fortune Records. The sound quality is primitive and the accompaniment sometimes sloppy, but Williams is several steps past lascivious on “Bacon Fat,” “Jail Bait” and “The Greasy Chicken,” and while more Fortune sides would be welcome, this certainly shows that the sex-crazed stomp of Williams’ recent work had a clear precedent in his back catalog. The rest of the set is devoted to later soul and R&B tracks Williams wrote and produced from 1965 onward, and while these sides feel a lot more conventional (and most are instrumentals), there’s plenty of major league groove in these songs, and the eccentric cover of ” “I Heard It Through the Grapevine,” the tall tale of “Cadillac Jack,” the hard-rockin’ fancy talkin’ of “Chicken Thighs” and the frantic sax honking of “Rib Tips (Pts. 1 & 2)” prove his wilder impulses were never far from the surface. An extensive collection of Andre Williams’ Fortune Records singles remains on the want list of most fans of vintage R&B, but Greasy and Explicit Soul Movers 1956-1970 is a step in the right direction, and it’s a fine introduction to the cream of his early work. Points added for an entertaining booklet featuring Williams’ very colorful memories of his life and career; it’s full of typos but has dozens of great tales of life in the music business.

Bill “Ravi” Harris is the funky sitar man. Ravi Harris & the Prophets play James Brown/Meters-inspired funk with a difference: The main voice on these instrumentals is sitar. It might be viewed as a gimmick — if it didn’t work so well. Harris is never going to make it as a performer of Indian classical music; he hasn’t got the chops for that, but his playing on this album is as good as it needs to be (let’s face it, Indian classical and instrumental funk require decidedly different skills). Solid bass, syncopated drums, chicken-scratch guitar, and economical organ fills form the backdrop, and the funky sitar rides at the front. They cover both James Brown and the Meters, which are interesting, but the originals are where it’s at. This has got to be the greatest album of sitar funk ever (not that there’s much competition). Funky Sitar Man is lots of fun, and recommended to fans of late-’60s style funk with open ears. 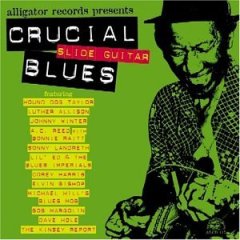 Potato Hole is Booker T. Jones’ first solo album in two decades and the early buzz in the media has already termed it his most “audacious,” but that’s not exactly the case with this new set. It isn’t audacious so much as it is moderately predictable, which isn’t necessarily a bad thing. Recorded quickly with producer Rob Schnapf in Georgia and California, Jones is backed here by Athens, GA’s Drive-By Truckers with Neil Young sitting in on electric guitar for nine of the ten tracks, most of which were written by Jones. This isn’t the MGs, and nothing here is close to being as timeless as “Green Onions,” but the album is a pleasant listen with a nice, funky, and kind of grungy groove that settles into a deep pocket, even if it never really completely catches fire. There’s plenty of Jones’ Hammond B-3, of course, but he branches out and plays both acoustic and electric guitar on the title track, and with up to five guitars going on some tracks, this is almost as much an instrumental guitar album as it is an organ one. If there’s really anything audacious here, it would be the cover of Outkast’s “Hey Ya,” which sputters around more than it grooves, and Jones’ B-3 lines simply can’t approximate the sassy joy of Andre 3000’s original vocal. Jones also covers Tom Waits’ “Get Behind the Mule,” which comes off more successfully, although, again, one misses Waits’ vocal. The final cut, “Space City,” is a lovely chill-out instrumental while the opening track, “Pound It Out,” does exactly that, pounding things out, full of fuzzed-out guitars. Young, for those wondering, doesn’t take over anything here but remains the consummate session player, showing a delicate sensibility on guitar that one wishes he’d apply more often to his own work. Again, there’s no “Green Onions” track here, and nothing that’ll end up as everyone’s ringtone. Potato Hole isn’t a slab of greasy Stax soul, either. It is what it is, a new Booker T. Jones album, and hopefully it won’t take another 20 years to get to the next one. 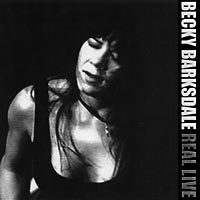 Becky Barksdale is a guitar-playing wailer from Port Arthur, Texas who blends the flavors of electric blues and rock to create an intense, brooding, powerfully sensual style.”Real Live” was recorded live at Spinout’s recording studios in Burbank, California. On stage, Becky Barksdale rocks the blues with convincing authority, combining fluid, fiery guitar licks with supple, edgy vocals.The rough textures of her voice and the raw passion of her singing have invited comparisons to Port Arthur hometown heroine Janis Joplin, a correlation both flattering and disturbing to a woman who goes her own way. While Becky finds comfort in the instant communication of a dark blues groove, she craves the adventure of experimental forms and feels compelled to go deep.”Satisfy Me,” a Barksdale original from the 1996 House of Blues Hot Biscuits Sampler, works the same thematic territory as Bessie Smith’s “Do Your Duty,” with decidedly different results.With the release of the powerful, ground-breaking “Real Live” in 1999, Becky documents the reason for all of the buzz surrounding her.Ten previously unreleased original tracks and a dramatic cover of the Willie Dixon classic “I Just Wanna Make Love to You” place her as one of blues’ most dynamic performers.

There has never been and may never be again a bluesman quite like Albert Collins. “The Master Of The Telecaster” was born on October 1, 1932, in Leona, Texas. A cousin of the legendary Lightnin’ Hopkins, Collins emerged with a blues sound and style all his own, featuring a combination of icy echo, shattering, ringing, sustained high notes, an ultra-percussive right-hand attack, and an unheard-of minor key guitar tuning (taught to him by his cousin Willow Young). Deeply influenced by T-Bone Walker, John Lee Hooker and Gatemouth Brown, Collins absorbed the sounds of Mississippi, Chicago, and especially Texas. He formed his own band in 1952, packing clubs around Houston. In the early 1960s, Collins’ “cool sound” instrumentals like the million-seller Frosty (recorded with a young Johnny Winter and Janis Joplin in attendance at the studio) and follow-ups Sno Cone and Thaw Out were all over R&B radio. Soon he was sharing stages with his idols Gatemouth Brown and T-Bone Walker. Then, in the mid-’60s (following a move from Texas to Kansas City to California), Collins broke into the rock ‘n’ roll world, releasing three albums produced by members of Canned Heat, and began playing the San Francisco psychedelic circuit. But Albert’s greatest success came after he signed with Alligator in 1978 and cut ICE PICKIN”. It won the Best Blues Album of the Year Award from the Montreux Jazz Festival, and was nominated for a Grammy. His following Alligator albums helped earn Collins every award the blues world had to offer. And, along with Johnny Copeland and Robert Cray (who decided on a career as a bluesman after seeing Collins play his high school prom) Collins cut the Grammy-winning SHOWDOWN!. Even after he was firmly established as a major modern bluesman, Collins never got too big for his fans and friends, and never took things easy. And he never relinquished the wheel of his battered tour bus that he loved to drive so much. Along with his band, The Icebreakers, Collins’ live shows — driven by his kinetic stage presence — were legendary testaments to the power of the blues. With his untimely death in 1993, Albert Collins left behind a blues legacy that continues to amaze and delight blues fans all over the world.

The content provided on this site is for promotion purposes only. If you like the music, please support the artists and purchase the CDs of the music you like. Files should be deleted within 24 hours. GranaziBar is not responsible for anything you may download. If you find any content that is violating the copyright law, please send an email to xotikosamothrakis at hotmail dot com and the content will be removed. Please note that songs are available for VERY short amount of time.If you like the music BUY IT.
GRANAZI
Create a free website or blog at WordPress.com.